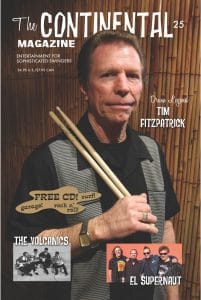 Australia’s premier surf guitarist, both as a solo artist and as a member of the modern day Atlantics, is back with an amazing 5 song EP. You can’t argue with a well-done version of the Santo & Johnny classic “Sleep Walk“, and while it’s pretty much impossible to top the original, Martin gives it a bright, modern spin, while also adding his own unique spin.

He’s developed his own sound, inspired by the past, but there is just something special that he adds to his instrumentals that is unmatched. Comparisons to the Shadows/Hank marvin recordings of the last 20 years that they were active are valid, to some extent, but Martin has his own songwriting style, and isn’t afraid to add more modern, adventurous sounds and textures to his songs. In addition to “Sleep Walk” there are 3 new songs, as well as an alternative version of “Surf Explosion” that was released recently.

If you haven’t had a chance to listen to Martin Cilia yet, this isn’t a bad way to start, once hooked you’ll want the rest of his discs! (www.martincilia.com)

Buy from Bandcamp. This is a high-quality download in MP3, FLAC and more and includes unlimited streaming via the free Bandcamp app.